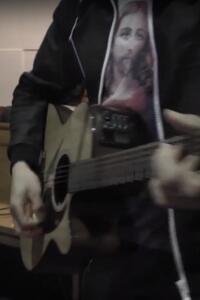 Servos do Amor, religious experience through music within a Brazilian migrant community in Amsterdam

Meeting every wednesday 19.00 h. The small entrance of the church is situated in a row of houses next to a canal in Amsterdam West.

The address is Jacob Catskade 11, Amsterdam.

Welcome to this website! 'Servos do Amor' is the name of an ethnographic film project consisting of a film, website and academic report. It is also the name of the group of people that this project is about: Brazilian migrants living in Amsterdam who organise weekly prayer meetings in the style of the Catholic Charismatic Renewal.

On this website you will find the ten-minute film that we shot during one of Servos do Amor's meetings, as well as background information on the global Roman Catholic Church and the local Portuguese-speaking church in Amsterdam. Furthermore, you will find lyrics and information about the project and about us.

In 1964 the first Portuguese-speaking parish was founded in the Netherlands in Haarlem. This parish arose from a need of the Portuguese immigrant workers of that time to be able to attend a service in their own language and to have a place to express their own ethno-cultural traditions within the Catholic faith. Portuguese migrants have long dominated the Portuguese-speaking migrant group in numbers, but as the years went by more Brazilians and Cape Verdeans also moved to the Netherlands.

In 1989 the Portuguese-speaking migrants founded their first own church building in Amsterdam: the ‘allochtonenmissie de Nossa Senhora de Fátima’ ('allochthonous mission of Our Lady of Fátima'). In the beginning, the church was also a place where people could come to get help with housing, juridical cases, seeking medical help and integration in the Dutch society. Socialising outside of religious services is still an important aspect of this parish.

The small entrance of the church is situated in a row of houses next to a canal in Amsterdam West. The address is Jacob Catskade 11.

Other languages in the Netherlands
Lees verder >>